High school interns build futures for their habitats and careers, too

Photo above: Interns create a beaver dam analog on the Wallowa River. (Photo by Lyra Dalton)


Throughout the summer, high school students in rural eastern Oregon will be pursuing an interest in working in natural resource management, from post-fire forest regeneration and planting along river banks to conserve them, to helping locals prevent wildfire on their property and doing trail maintenance in the state’s largest wilderness area, the Eagle Cap. It’s all part of Wallowa Resources’ High School Apprenticeship Work (HAWK) program.

The program is underway this summer, with a new crew.

“We actually have a full female team, which is pretty awesome for natural resources career exploration,” said Lindsay Miller, youth education manager for Wallowa Resources. “They’re also working with different professionals locally, and just trying to help do some of the work that needs to get done.”

Miller said the nonprofit wants to accept more than the current number of four teen interns, but needs more funds for student salaries, a larger truck to transport them and a staff member to lead each crew.

“We know the need is there,” said Miller, who developed the program eight years ago. “In the last couple of years, we’ve had anywhere from nine to 11 applicants each year, and we hate turning away kids. The need and the desire among the students is there. The schools are familiar with our program, and it’s become a model in the community. We just want to be able to afford more opportunities.”

A former education specialist for the program, Lyra Dalton, detailed the summer adventures of her crew in the following article that appeared in “Ripples in the Grand Ronde,” a quarterly publication of the Grand Ronde Model Watershed last fall. Her photos and article follow:

After weeks of working outdoors in scorching-hot weather, Wallowa Resources’ High School Apprenticeship Work (HAWK) program interns were more than ready to spend some time in the water, and a day out with Ian Wilson of the Grand Ronde Model Watershed (GRMW) was the perfect solution.

These four muddy teens came to work with Ian as part of the HAWK program, an eight-week paid internship connecting local high school students with natural resource careers. The program pairs formal educational components covering scientific literature with hands-on work with professionals in the field. Through this mentored program, interns gain firsthand experience in the work world, provide meaningful labor for the community, and get to explore a variety of different career paths.

Youth engagement in real-world career exploration has documented benefits that last a lifetime. It builds job skills and increases workforce readiness to give teens a leg up as they graduate and move into the next phase of their lives.

As one HAWK intern said, “I gained crucial information about my character, what I want out of high school, and as a career post high school.” In Wallowa County, landscape-level stewardship and management requires mindful and meaningful collaboration among many public and private organizations. Likewise, the HAWK internship relies on the collaboration and expertise of organizations and professionals in Wallowa County to help inform and guide the projects in which interns participate.

This summer, during a week focused on water management in Wallowa County, the HAWK interns partnered with Ian to explore different river restoration projects and try their hands at doing some restoration work of their own. Their first stop was to observe new channel construction on the McDaniel Ranch near Lostine. This project highlights the challenges and successes of restoration on a large scale and over many years.

The interns were given the opportunity to review the planning documents, tour completed sections of the project, and observe as the river was re-routed by large machinery to install new instream wooden structures. The interns even saw fish that had taken up residence in part of the restored channel, resting in one of the protected areas created by an earlier stage of the project.

After all that observation, the interns were ready to get their hands dirty. Ian took them further downstream for the real project of the day: creating a beaver dam analog (BDA) on a small side channel of the river. The disappearance of beavers across much of their natural western range has prompted recovery efforts. Beavers are natural ecosystem engineers and, much like humans, they are known for changing the habitat around them to suit their needs.

Although the flooding they cause can be problematic at times, there are many long term ecological benefits to having beavers as a part of the landscape. Beavers recharge the water table, lower water temperatures, create crucial habitat for native fish, and prevent channel incision while bolstering riparian vegetation.

In the absence of these hard-working animals, the teens stepped in to fill a similar role by building a dam of their own. Armed with hip waders, juniper stakes, rocks, and willow whips, the interns waded in. The first order of business was pounding a row of stakes into a small side channel. Once they had made a staggered line across the stream, they were able to start using the stakes as a loom, weaving in fresh willow whips between them to create a cohesive structure.

As the dam began to take shape, they worked to tighten and solidify it by weighing down the structure with rocks. Holes and gaps were filled by hand with dirt and grasses. Waders were topped, gloves leaked, and a shovel was bent, but after several hours of hard work, there was a dam slowing water movement and backing up the channel to create a brand-new habitat.

As the river ebbs and rises, the BDA will slowly degrade without maintenance, but as long as some of it remains, the BDA will have a positive impact on the surrounding ecosystem. In this way, we can’t hope to replicate the ecosystem services that would have been provided by having actual beavers on site to continue to repair, improve, and expand the dam system throughout their lifetimes. However, BDAs are another tool in our conservation toolkit that can help improve our watersheds right now as we seek to reintroduce beavers to the landscape so they can do the work for us.

Likewise, this experience gives the interns a new set of tools and questions for facing challenges in natural resource management, teaches them how to creatively overcome obstacles and solve problems, and shows the value of this work on both large and small scales. As one intern put it, “Prior to the internship, I had very little idea what was available and what its impact was. Now I have a much better idea of what I would like to pursue.”

The Wallowa Resources Natural Resources Summer Internship/HAWK program runs for eight weeks in June, July, and August for local high school students over 15 years of age. This is a paid internship, and next spring, we will be looking for a new four-person crew to take outside next summer! For more information and to apply, please visit this Wallowa Resource’s web page. If you’re interested in becoming a community partner, please contact Lindsay Miller at lindsay@wallowaresources.org. 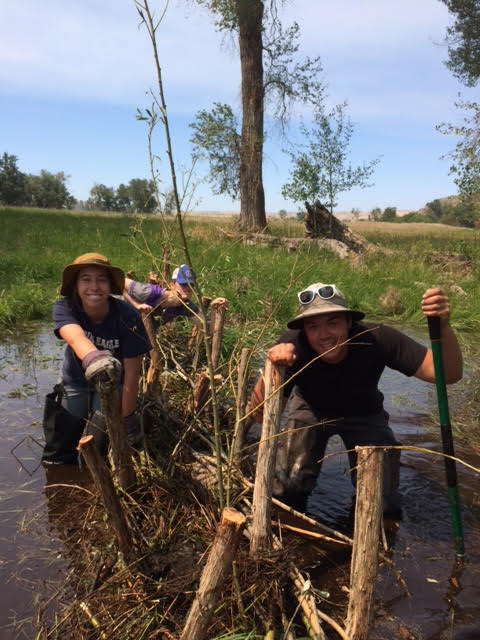