The ranch team is working on improving methods for burning wood and brush in kilns to produce biochar, which yields many ecological benefits — and to inspire others interested in doing the same. 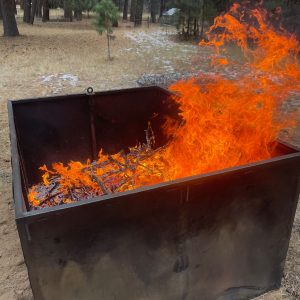 Creating biochar captures and stores carbon that would otherwise be released into the atmosphere. Instead of burning slash piles and brush trimmings in open fires, burning wood debris in biochar kilns creates less smoke and carbon release, and leaves you with biochar that can be used for a myriad of environmentally positive uses. Pam Wavrin, director of ranch operations, cited some other benefits of biochar including that:

The ranch team has built two new kilns that make biochar production more time- and cost-effective and are easy to move around the ranch. Ranch Crew Member Colby Mills built two metal rectangular kilns that are 6-feet by 8-feet, larger than the original kiln that’s 80 inches in diameter and 4-feet high. The new kilns are large enough to fit 7-foot tree limbs, which saves time on cutting down the debris.

Mills left the bottom of the kiln open so the crew can use its mid-sized Kubota tractor forklift to pick the kiln up and move it to where it’s needed around the ranch. The biochar piles left behind can be raked out in place or scooped up to be used elsewhere on the ranch. 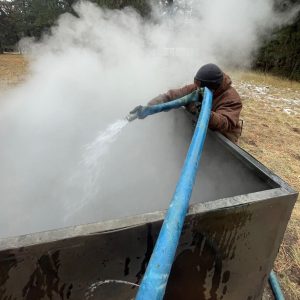 “We can burn about three or four times more than the last kiln,” said Mills, an experienced welder. It took him roughly two days to weld each one. He used thicker low-carbon steel, welding each piece at 90-degree angles rather than 45-degrees, to make it more durable and faster to construct. The cost to build both kilns was less than the purchase price of the original kiln, he said.

Once the debris burns down to coals, the ranch crew pumps water from a 250-gallon tank onto it to halt burning at the char stage so it is not reduced to ashes. “It’s a fairly simple process,” said Mills.

There are many ways to produce biochar, some more refined than others. The ranch employs a faster slash and burn type technique used by the Forest Service and others in on-site burns.  Using an open kiln, slash is added to the fire as it is cut, and the size of the branches tends to be more variable. This is much less time intensive than more refined methods that require using similarly sized materials that have reached a particular percentage of drying, and burns are frequently ‘quenched’ as each layer is burned, then restarted after adding more fuel. With over 50 acres of forest at Pine Meadow Ranch, the more intensive methods were too time consuming to be effective both cost and time wise.

The crew has been thinning out water-greedy junipers in our woods, turning them into biochar, and spreading the biochar at the base of some of the ranch’s drought-stressed trees, such as cottonwoods, which are suffering the most, Wavrin said.

Biochar caught the attention of City of Sisters Public Works Director Paul Bertagna, who visited the ranch to see our process.  The department began doing some burning at the wastewater treatment plant recently, Bertagna said. The city is considering using box-like biochar devices called Air Curtain burners for all of the landscaping debris collected throughout the year, he said, which will result in a more refined biochar than is being produced at the ranch. 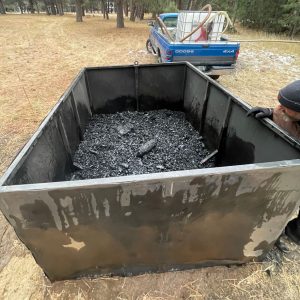 “We want the ranch to serve as a demonstration site for people exploring sustainable agriculture methods,” said Wavrin.

Even individuals can pursue small-scale biochar production. “People are taking coals out of their woodstoves, stopping before it turns to ash, and drenching it with water at the char stage (when it looks like charcoal) and then grinding it up to put in their gardens,” Wavrin said. “We don’t grind the biochar we produce at the ranch, which is in larger chunks than commercial biochar. We have the cattle and wildlife do a lot of that work for us.”

At the ranch, the plan is to add some biochar to compost piles, spread some of it in the forest, and put some onto the pastures where cattle graze.  An experiment was started at the ranch last summer, when Max Springer, an ecological and land management intern, devised a test to measure the benefits of biochar and no-till methods on restoring soil health to the cow pasture. The results will be in this spring.

For more information on the benefits of biochar, click here.