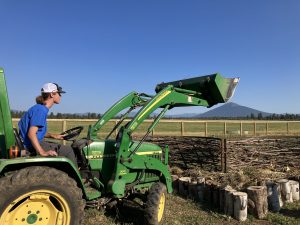 Here at the ranch, we’ve been employing hügelkultur in our garden beds, a technique aimed at creating rich soil that retains water. We are doing this by layering wood debris, compostable plant matter and finished compost in mounds in raised beds, said Pam Wavrin, director of ranch operations.

For our base layer, we’ve been using mostly downed branches from cottonwood trees, followed by an equal layer of grass clippings or leaves. The top layer is of finished compost — hops and coffee grounds and plant waste from our gardens.

The bottom two layers break down over time, composting in place and creating rich soil that holds moisture and helps reduce the amount of water needed for what will be planted there. The method also helps with soil aeration and offers an alternative to burning wood debris, sequestering carbon in the soil rather than adding it to the atmosphere.

(We also use another alternative to burning, creating biochar.) 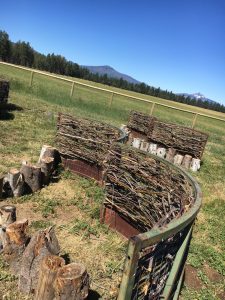 We used old cattle feeders to make hügelkultur beds in the shape of multiple flying birds.

Hügelkultur may also keep soil warmer in winter. Wavrin noted that we had spinach and lettuce that grew through the winter last year, which could be a result of the heat generated by the composting debris, or it might’ve been caused by the mild winter.

As a center for arts and agriculture, several of our hügelkultur garden beds will also have an artistic component. We’ve recycled iron cattle feeders, turning them into wing-shaped frames for three raised beds. We’ll be creating several more for a series of raised beds to complete the design of a flock of birds in flight.

Creating your own hügelkultur garden beds is relatively easy — you don’t have to worry about following strict rules, Wavrin said. Just remember to avoid hardwoods such as black locust, and old-growth redwood that will not decompose, or black walnut and pine needles, which will introduce toxins to the soil. Keep in mind, too, that as the compostable matter breaks down, it compacts and settles, so you’d have to add to it to maintain a desired height.

All this will make for fertile ground when we’re ready to plant in spring.