IN A LANDSCAPE: Classical Music in the Wild

As the sun began to edge its way toward the Three Sisters Wilderness peaks on a July evening at Pine Meadow Ranch, pianist Hunter Noack stepped up to his Steinway grand piano, the 9-foot-long 1,200-pound instrument and stage placed in a grassy meadow via flatbed trailer. IN A LANDSCAPE: Classical Music in the Wild, is transforming the way a range of communities engage with classical music. Wireless headphones for each guest capture the music, allowing them to roam freely in nature as they connect with the artistry and the environment simultaneously, in a shared experience that brings diverse communities together.

A nonprofit which relies on the support of dozens of partner organizations, sponsors, and foundations, In a Landscape travels to stunning, remote spots across the state and a few around the West. For nearly a third of the guests, it’s their first live classical music experience and many are invited for free. The project has gained national media attention and in the first week of Noack’s latest release, “In a Landscape” reached the top of Billboard’s classical chart, nudging out Yo-Yo Ma in the spot. What began as nine performances in 2016 has grown to 60 per year.

The seeds of this musical landscape were sown while Noack was growing up in Sunriver, where his father was a golf pro and his mother, who ran the nonprofit Sunriver Music Festival, taught him how to play when he was 4 years old. He grew up hiking, fishing, kayaking and he pursued his piano studies at San Francisco Conservatory, University of Southern California and Guildhall School of Music and Drama in London.

He learned about the history of the Works Progress Administration, its thousands of free concerts and plays presented in public lands. The In a Landscape nonprofit model seeks to emulate that. Year-round fundraising subsidizes $70 tickets, keeping them at about $35, while about $60,000 in tickets last year went for free to locals of the landscapes as well as to other groups such as People of Color Outdoors.

Noack introduces each piece with interesting, little-known anecdotes about the composers and guides the audience in how to listen for timing that complements meandering through the landscape. Or, he prompts you to simply be still and tune into the surroundings — quaking leaves in the cottonwoods, tall, swaying grasses or the wooly sheep nearby.

As audience members move around, their eyes often meet and the headphone-wearers typically acknowledge each other with a gentle smile. The effect is at once intimate as well as communal, said Noack, 33.

“The feeling is like there’s some magic happening,” he said. “I feel comfortable saying that because I don’t feel like it’s because of me. It’s because of the place, and it’s because everybody is making an effort to gather and listen and do something new.”

Frequently an outdoors experience involves a hike to a beautiful spot, taking a picture, having lunch and hiking back, but this outdoors experience is different. “This is an activity where the point is to be present,” said Noack. “The point is to have a soundtrack to notice the things around you, to notice how a leaf moves or how you feel in the shade, or what the breeze smells like, and just gives people some space to be in nature and be present.”

Traveling to the stunning settings of many rural areas, the small, dedicated staff and devoted volunteers take enough time in those areas to build a relationship with the communities, said Lori Noack, Hunter’s mother, who built a career on producing classical music performances and managing nonprofits before becoming executive director of In a Landscape.

For artist Kathy Deggendorfer, founder of The Roundhouse Foundation in Sisters, the Noacks’ work exemplifies the programs the foundation supports — ones that inspire creativity and connect people with each other and their sense of place in Oregon’s rural communities.

“It is such a pleasure to host Hunter Noack and his team from In A Landscape at Pine Meadow Ranch,” Deggendorfer said. “Bringing that beautiful Steinway piano to unexpected and treasured outdoor spaces is exciting. We love that In A Landscape presents a new lens for the audience to engage in the arts. Hunter’s playing and desire to give insight into the music and lives of the composers encourages us all to do something really needed right now — listen more.”

Noack, who is based in Portland, used his residency at the ranch last fall in part to select works for the performance.

This year, Roundhouse was pleased to present In A Landscape as a fundraiser for the High Desert Museum.

Noack often collaborates with others for his performances, and at the ranch, Portland-based songwriter Julian Saporiti of No-No Boy blended original folk songs while staying in Sisters for the show and performed them while telling stories that illuminate hidden American histories, taking inspiration from his family’s experience living through the Vietnam War and other stories of Asian American experience.

After hearing Noack perform, Saporiti said, “I think it’s one of the only opportunities I’ve ever had to feel music come alive in such a way. The mountains and the landscape, but then to be like you’re scoring them live? Oh, my God. That’s what I’d say. I’d say, my God. To be close to that kind of awesomeness, combining the majesty of this landscape and the majesty of these composers and Hunter’s proficiency? I’m tickled to be a part of it.”

Saporiti, who has performed with indie rock acts at festivals with thousands attending, placed In a Landscape in the top five musical experiences of his life.

Many guests travel to hear Noack perform in other landscapes, too. Bryce Dugan said he was going to another show at Joshua Tree National Park when he’s traveling there from Oregon this summer. As he was leaving the ranch he said, “It’s as I always call it, God’s front door.”

Photos below: In a Landscape at Pine Meadow Ranch 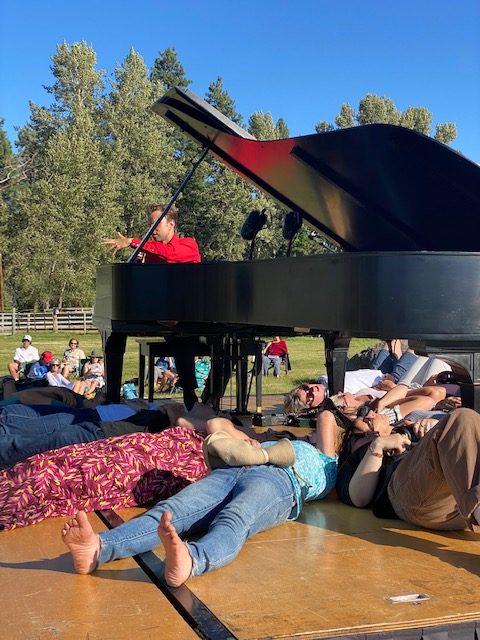 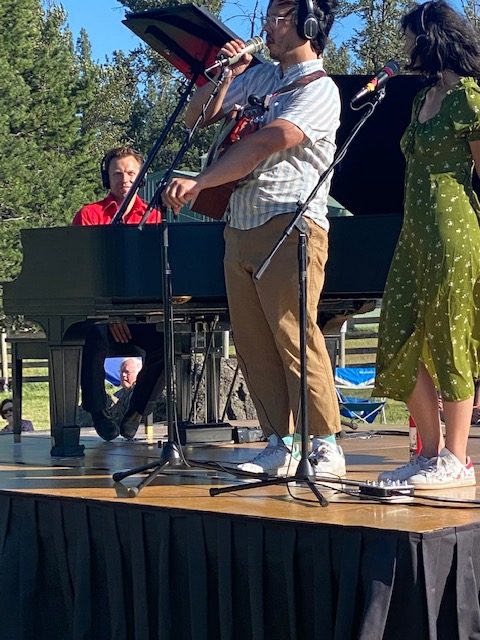 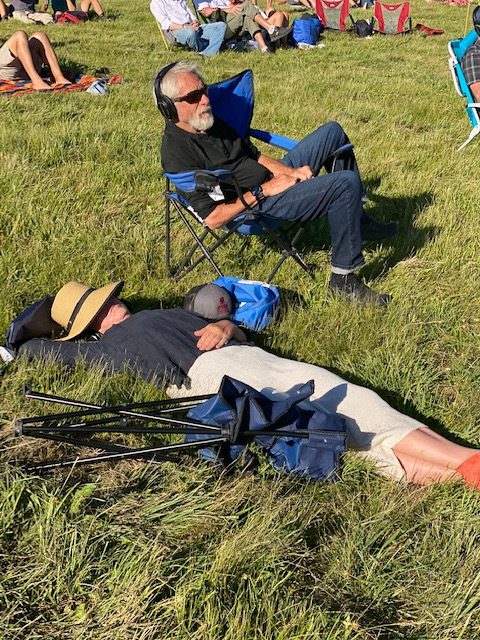 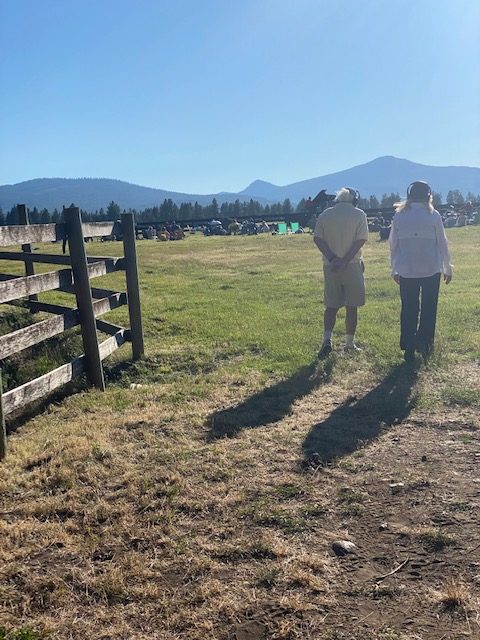 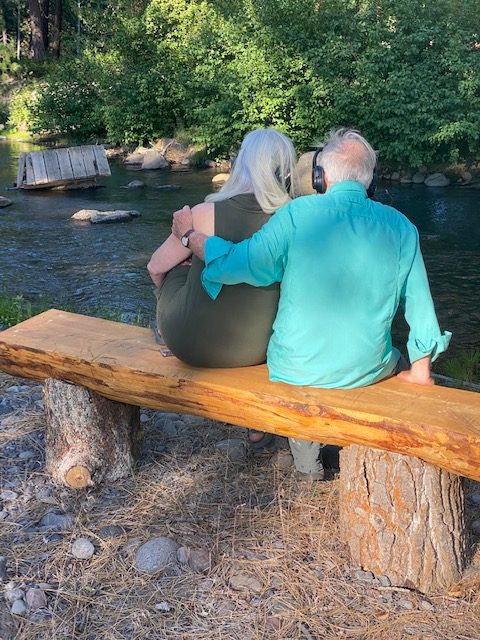 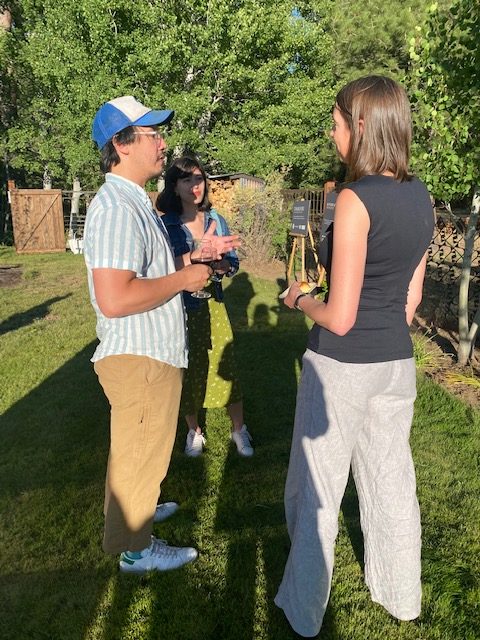 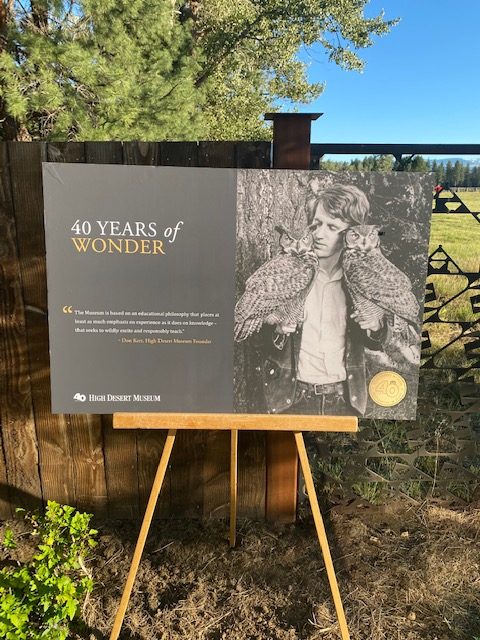