When air thick with smoke from wildfires prevented Oregonians from venturing outside for weeks two years ago, Hilary Pfeifer, a working artist for decades, embarked on a project she’d had on the back burner for a while — a version of a deck of tarot cards aimed at guiding people in creative pursuits. Traditionally, tarot cards are used as a way to reveal truths about your life. Her tarot deck concept would be about creativity and nature and would first involve creating a series of collages as a basis for the art on each card.


Pfeifer, a native Oregonian who lives in Portland, works in a range of practices and styles in conceptual, production and public art. She’d created a deck of playing cards a couple years ago using images of the collages she’d done of birds.

She researched the major characters among the 78-card tarot, such as the sorceress and the magician. Each carries meanings, and when those cards are drawn, the tarot reader will interpret how they apply to your life. “They all are symbolic in certain ways, and there’s a really rich history behind the origin of it,” said Pfeifer.


Her deck of 26 cards and an accompanying booklet would be used differently. “You can draw one, maybe every day for inspiration. Once I did the research on what the original card meant, I looked into how I feel about creativity, because I’ve been making my living for about 30 years, and it’s been up and down. I’ve learned a lot of stuff along the way and I thought it’d be a great way to talk about my experience and give other people inspiration.”


Another influence for her set of cards is a 100-card deck created by the musician Brian Eno in the 1975 called Oblique Strategies. “I have always been fascinated with it,” she said. “There’s no image, just text. They’re prompts for musicians and I’ve always loved those prompts.” Some from that deck include: “Discard an axiom”; “Honor thy error as a hidden intention”; “Not building a wall, but making a brick”; “What are the sections sections of?”; “Always first steps”, and “Idiot glee.”


When it came to creating her deck, Pfeifer thought, “Ok, what would Brian Eno say?”


Next, she researched the skills particular to certain birds. “Like, who’s an amazing nest builder, who works in groups — things that could tie in.” She started doing the collage work for that in her studio at the ranch overlooking Whychus Creek.


She’ll scan the collages and reduce them to card size. “Then it gets printed, but it’s gonna be a long project,” she said. “I’m sure I won’t finish it this year. It’ll probably be next year, but I’m starting. I wanted to start it here.”

When she first arrived at the ranch, she embarked on an art project involving repurposing an old coin-operated newspaper box. She transformed it into an art installation library for cataloging the art installed around the ranch by artists in residence. Pfeifer painted it colorfully, depicting some of the installations and a pine tree bearing forest creatures.

The metal box will hold information about the pieces made, contributed by each resident artist. Pfeifer hand-crafted a map of the property showing where to find the work. “So then anybody who opens it can be like, ‘Oh, there’s something way out here. What is it about?’ And then they flip it and read it,” she said. On the front, framing the glass, she riffed on The New York Times’ motto and painted: “All the art that’s fit to print.”

Pfeifer brought the box to the Sunday Farmers’ Market in Sisters alongside a table there where fellow resident artist Ayla Gizlice, who brought samples of some of her work, and with Ana Varas, art projects coordinator at PMRCCA, talked to passersby about their work at the ranch and invited them to Gizlice’s art kite flying event. “It was really fun,” said Pfeifer. “It’s been amazing here. It’s just so beautiful, and the three of us residents are really here to work, and so it’s really nice, just having a good workflow.” 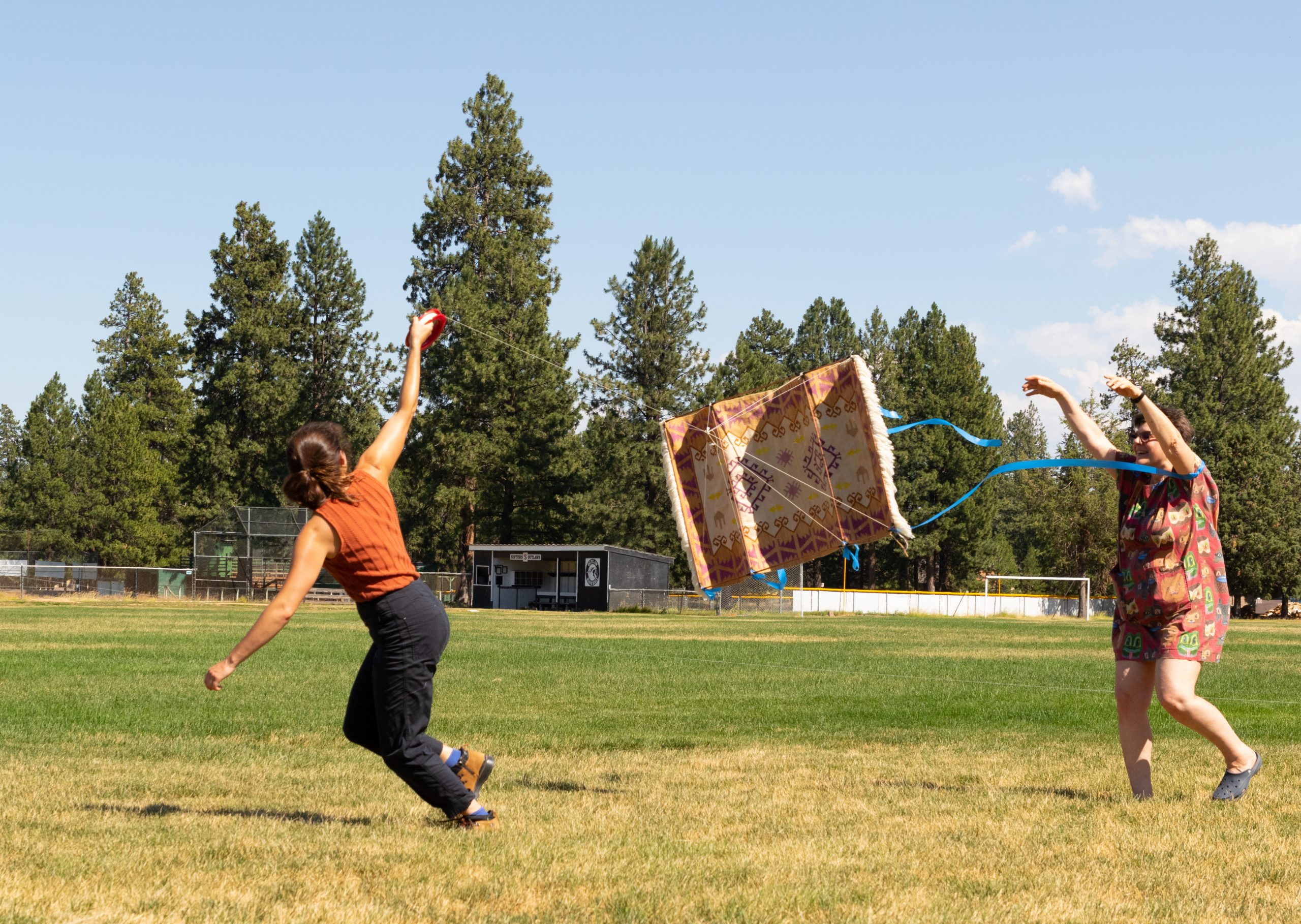