Residencies inspire interpretations of the 2022 theme “Coexistence and Regeneration” through paintings, printmaking, ceramics and an installation

Three Oregon artists in residence recently reflected on works they created which were inspired by their experiences at the ranch and informed by their thoughts around the program’s 2022 theme, “Coexistence and Regeneration.” Here’s a glimpse of how their creative process unfolded during the latter half of May, culminating in paintings, printmaking, ceramics and an installation.

For the last few years, many of Nancy Helmsworth‘s paintings have been inspired by Oregon’s forests.

“Trees are so important in this state, and they’re such a resource in the state, they’re something I truly love. And that they have been living hundreds of years undisturbed, during the pandemic, they were a reminder of calm and peace,” said Helmsworth, a long-time art teacher who lives near Forest Park in Portland. A residency at the ranch, in a different type of forest environment was a new source of inspiration for her printmaking.

“I had this idea of toile wallpaper, which, with the rise of the middle class in France, featured many scenes illustrating idealized societal norms. Many of the most popular artists of the time were invited to create designs, and they often recorded historic places and events. It’s quite an interesting history,” said Helmsworth.


She applied 18th-century toile to her focus on issues facing forests today. She created stencils of trees, deer and a bureaucrat, nonchalantly drinking coffee at their desk while wildfires are igniting. Helmsworth also used the printmaking studio at Atelier 6000 in Bend to create the work, “Turning Up the Heat,” posing the questions: Are we experiencing climate complacency? Are these fires becoming our norm?

Some of her paintings during her residency were inspired by something at the ranch called biochar. When brush and trees are thinned for wildfire prevention, they are burned in a kiln, which decreases carbon dioxide pollution and creates biochar, a kind of charcoal.

“It’s been amazing—this is an amazing place, having the dedicated time has been wonderful, and being with the other artists was great,” she said. “We worked in parallel and are pretty different, but we helped each other.”

When students from the Academy At Sisters visited, Helmsworth did a printmaking and stenciling project with them. “Oh, that was good. It was really fun—they seemed to be having a great time,” she said.

Ceramic artist Shelly Fredenberg of Eugene focused on the coexistence of natural materials with man made material. She brought with her wild clay that she’d dug from places she’d recently visited: Moab, Utah; John Day, Oregon, and a few spots in Montana. She combined the clay with minerals she’d collected, crushed and mixed in commercial clays to achieve “alchemistic conglomerations,” she said, holding up a ceramic piece dotted with bits of a ground manganese rock.  “You can see how it just completely knocked it through,” she said.

During her first couple of days of the residency, she walked around the ranch and along Whychus Creek and found brightly colored pieces of woven plastic baler twine that had blown in and landed on a fence, or the ground. “So I brought that material in and thought, ‘Well, what can I make with it? Or how can I incorporate it with natural material?’ And so I made these five pieces. The parts of the vessel correspond to the parts of the human body. And so you have the foot, the belly or the body; you have the shoulders of the pot, the neck and the lip before the mouth. So I wanted to concentrate on the lips in the mouth.”

She did so to make a connection with the ranch’s dedication to sustainability. “There are some things you can’t escape,” she said. “In general, do we go far enough—when we buy our clothes, they have nylon and you know, and that becomes micro plastic. But yet we say we care about the earth. And then we make choices that are different—so giving lip service to those ideals. And so that’s what these five pieces are about—to highlight the lips in the mouth of these natural vessels.”

Another human-made ingredient she found for her ceramics on the land was a brick, which she ground up along with a rock from the driveway, mixed in sand from the creek and used to make a palm-sized bird for a found nest, with a few tiny flowers tucked in.

For Fredenberg, a highlight of the residency was engaging with the students from Academy At Sisters during the day they visited the ranch. “I think they loved being here,” she said. “They had such a great time. One girl said to me, ‘This is the most soothing thing I’ve done in a really long time.’ She was just so absorbed in it.”

Portland artist Crystal Schenk used her residency at the ranch to pursue an idea she’d had in the back of her mind for a while—a sculptural installation recreating a forest and town after a wildfire. She used Aqua-Resin, a water based, non-toxic, sculpting resin to make 5- to 10-foot tall molds of a tree and painted with a few different colors to make them appear charred.

“I don’t yet have an exhibition location scheduled for this work, but once I do, I plan on wholly transforming the space to create an all-encompassing experience. I envision painting the walls to appear like billowing smoke, and the ceiling the color of the sky when the sun is covered by that deep, eerie, orangey red,” she said. “I’ll paint the floor black, and put down a black sand and biochar so it’s crispy underneath your feet.”

You’ll walk through the burned trees of the installation, the scale will drop from life-size dramatically as you reach a miniature trailer park the artist made with a 3D printer.
“When you drive through burned areas this year, you can see who could afford to build and who couldn’t,” she said. “And so I think that’s one of the other reasons why I wanted this to be a trailer park is that the most disadvantaged people are the ones that are so severely impacted.”
Schenk reflected on her experiences growing up in Happy Camp, California, near the Oregon border.

“There was a beautiful lightning storm, and we were sitting out on the back porch watching it, and it was just so gorgeous,” she said. “And then a few days later, the mountains were on fire all around us. And we had our bags packed, and my dad was watering down the house with a hose, hoping that would save it, and fortunately the town was spared that time. But two years ago, half of it burned down when we were having those really extreme forest fires. I thought this was pretty timely.”
Much of her work deals with memory and how it serves or fails us. “It’s like this creative and impartial beast that moves and changes, especially in the face of trauma. So I wanted to make a space where we go from our human scale to feeling like we’re floating above ourselves looking down on this.” 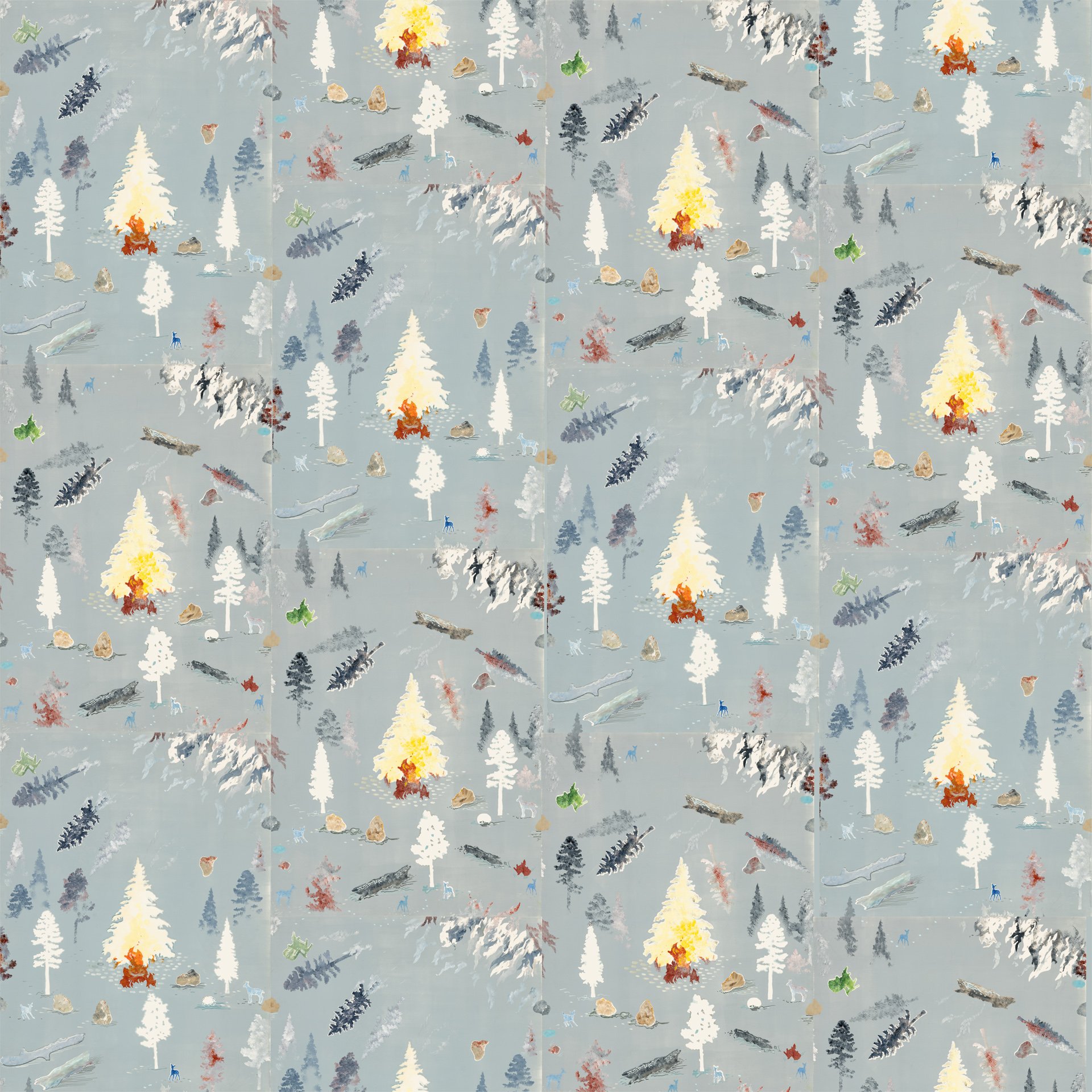 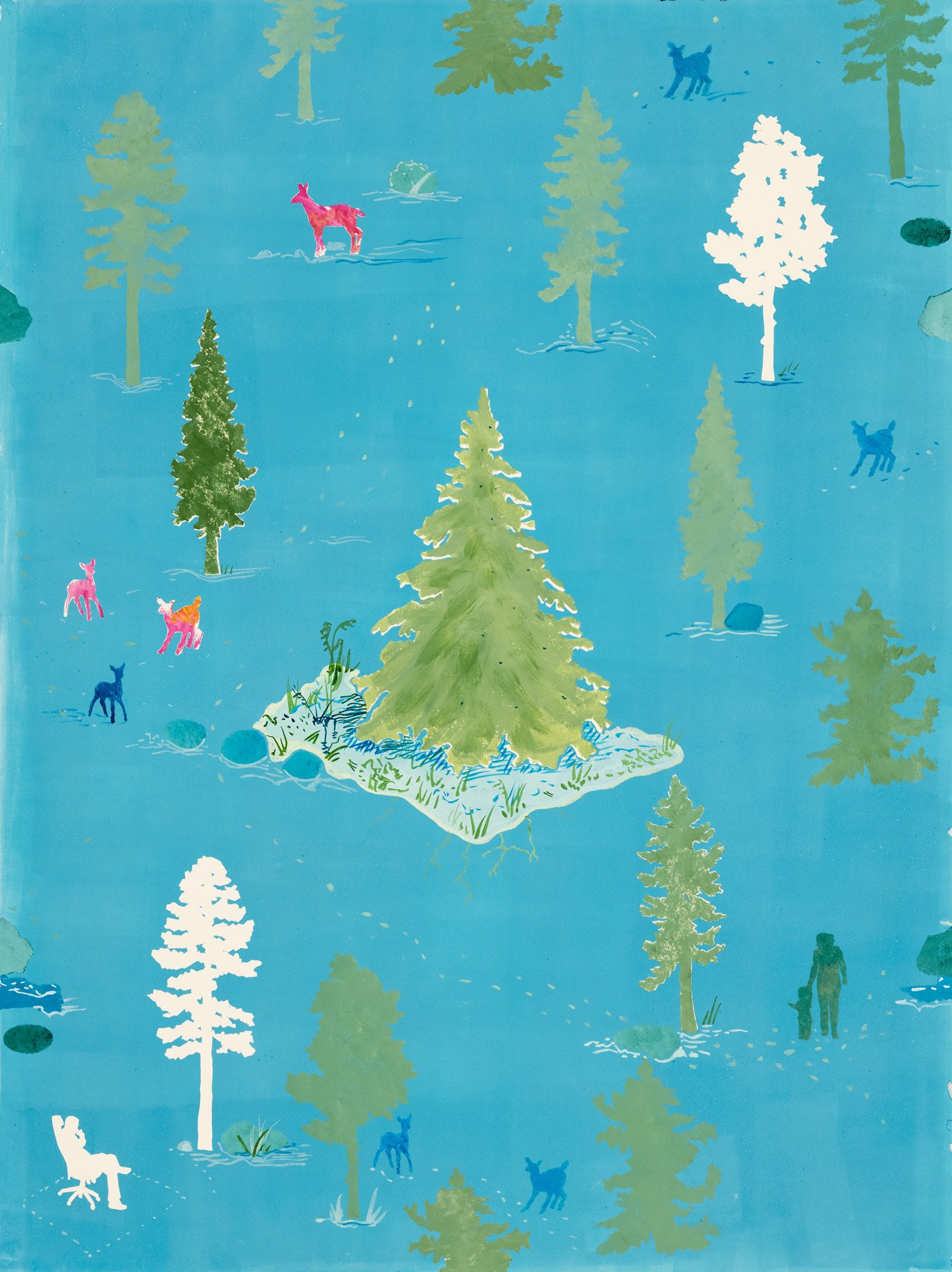 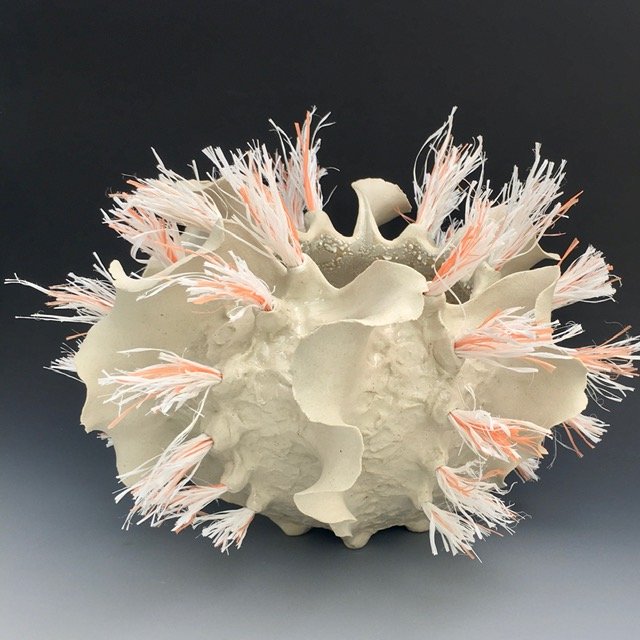 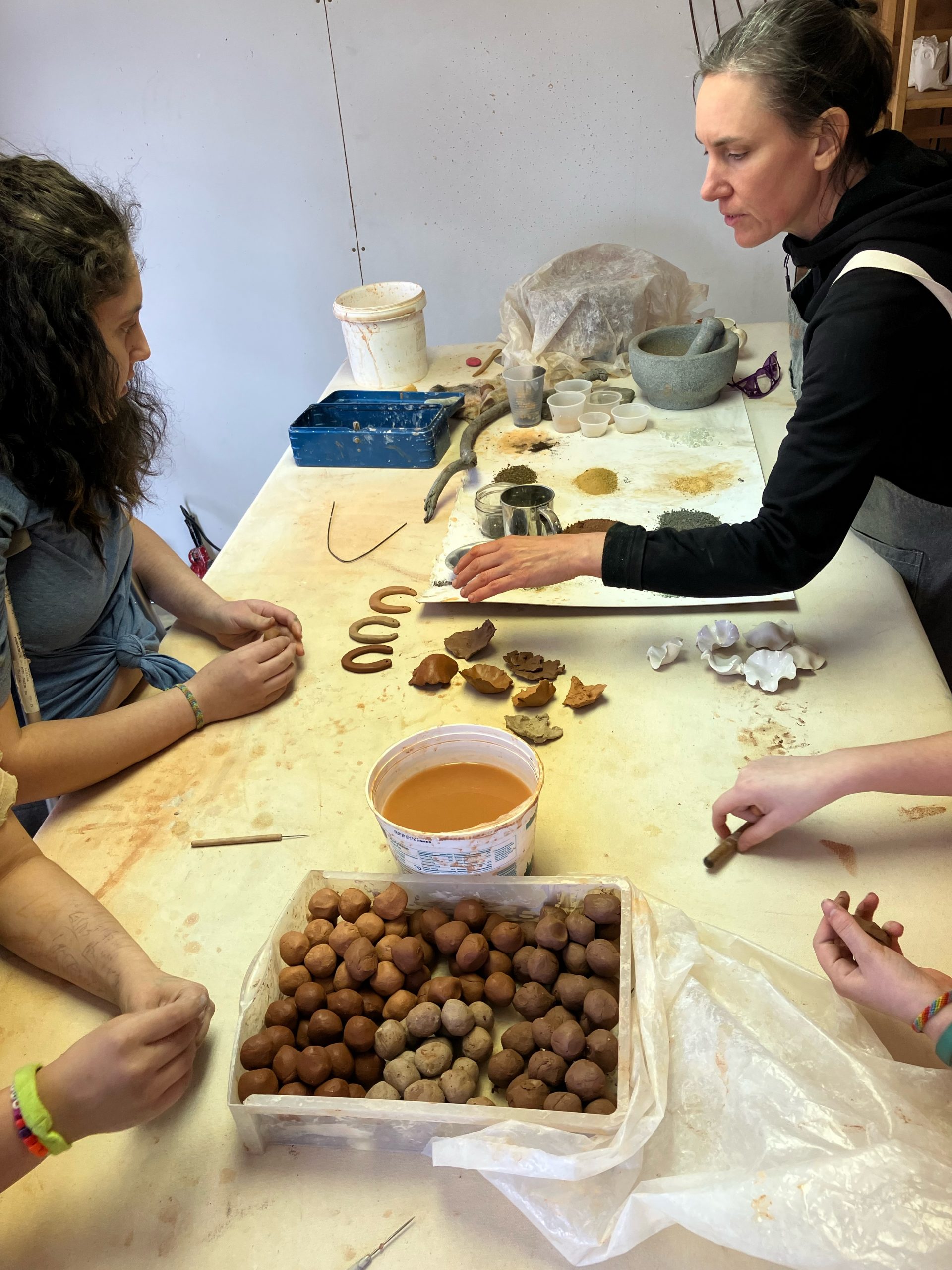 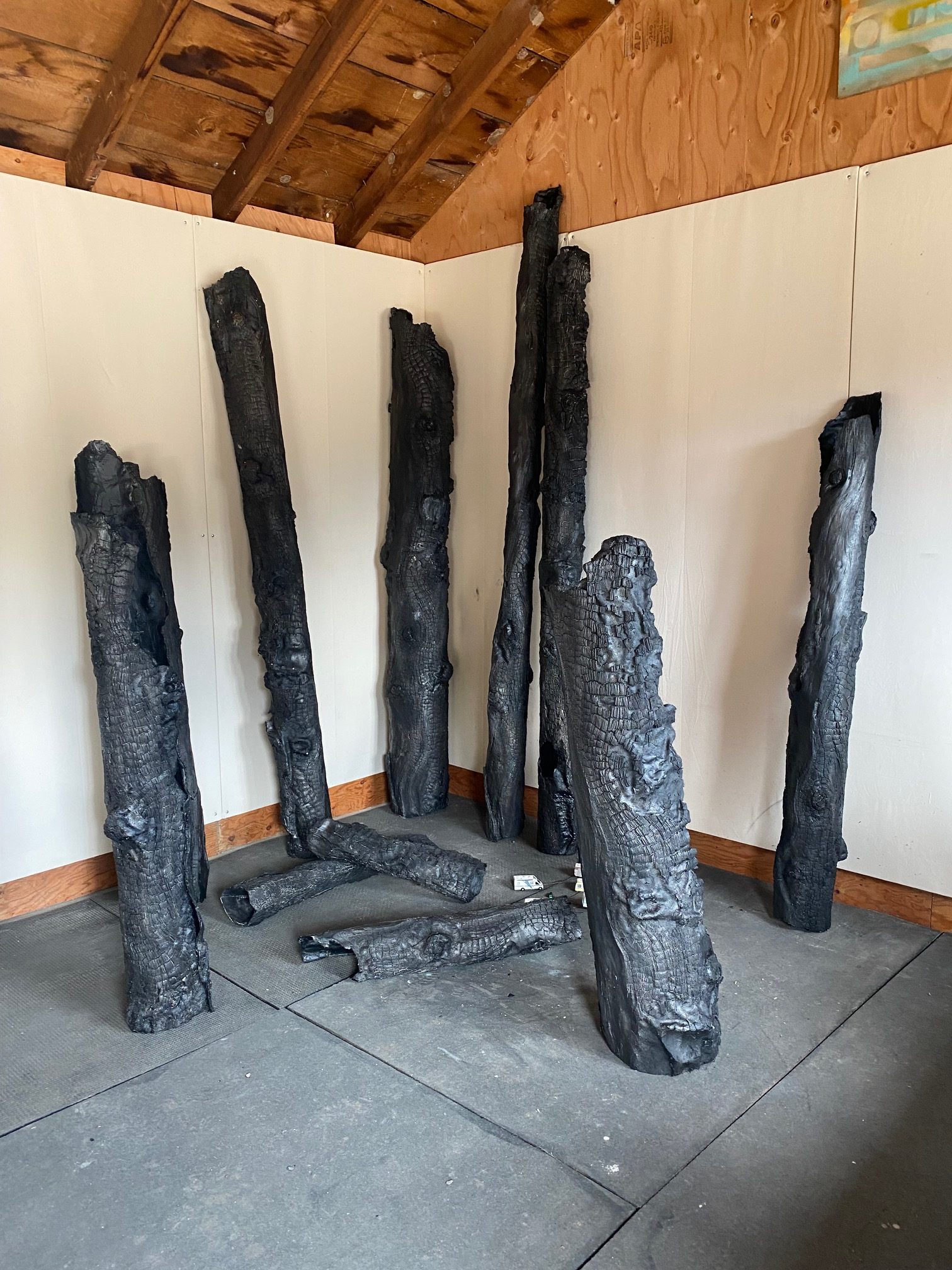 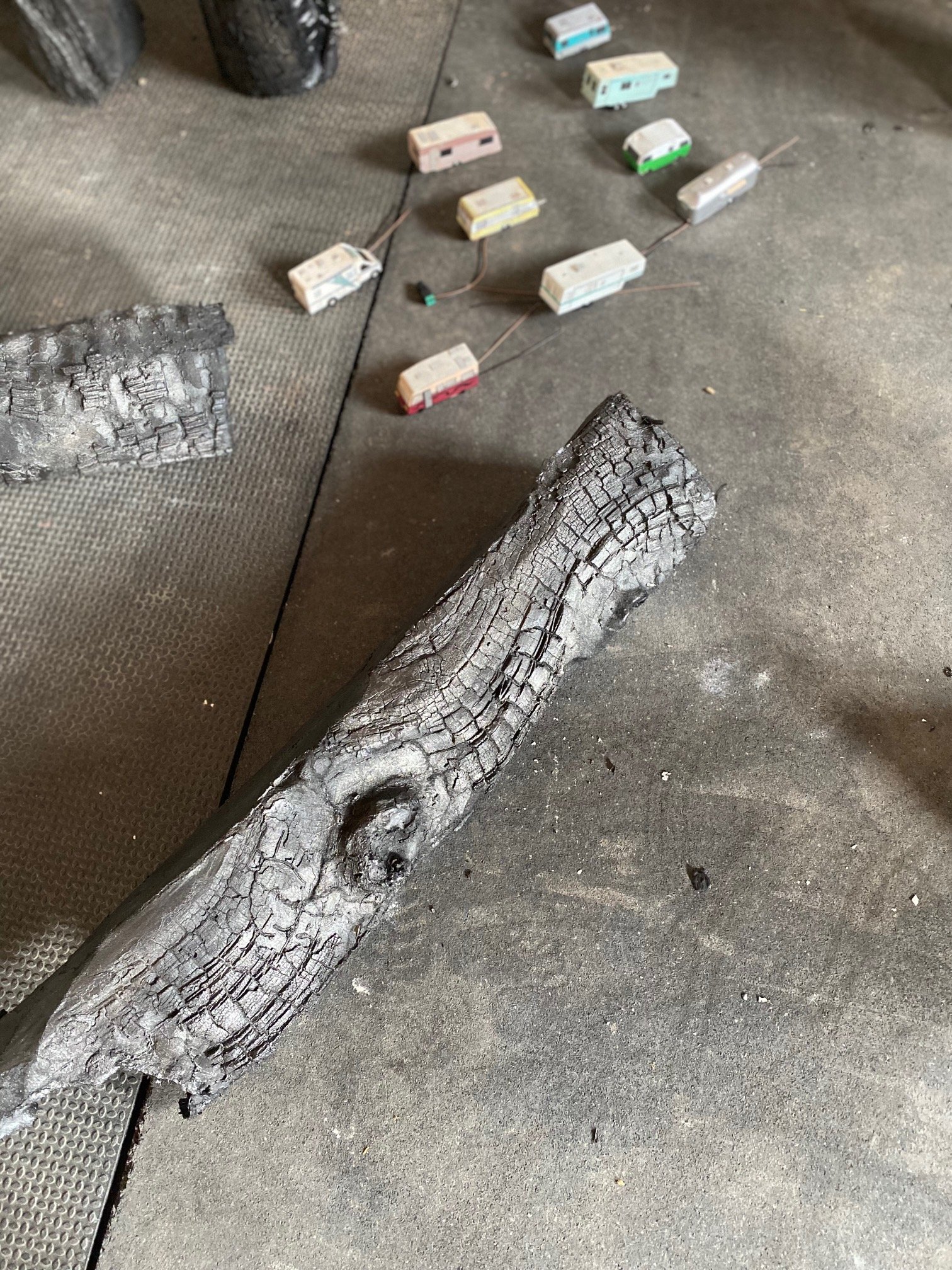